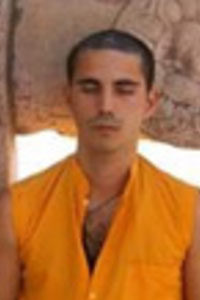 Om (Ricardo Cristovao) was born in Portugal, star sign Aquarius, in 1979. Youngest son of 10 children, he always had many influences and visions of what life is and what it should be, but was never satisfied by these small definitions of Life.

Since a very young age, he felt that he was a Jedi, a user of the Force but didn’t know how to use it…Also due to being raised in a very Christian family, already at the age of 7, a deep understanding came that if Jesus was Son of God and if We were his Brothers, We should also be Sons of God and have the Power of God. This however was quickly forgotten.

At the age of 21, while exploring with some etheogenic substances, he felt an enormous revelation that All is Interconnected, Alive and Conscious somehow and that we affect each other in ways we cannot perceive through our normal senses. The experiences continued to grow until there was a big collapse. The reason was lack of understanding and missing the progressive step by step that practice and meditation provides.

After some psychiatrist almost destroyed his life with a prescription to make him a vegetable for 2 years at the tender age of 21, saying that this story of being Interconnected to life, and feeling others inside was all craziness, a deep feeling that what he had felt was too Great to not be True became clear. One month after starting the drugs, a decision to stop happened.

He started to go to a psychologist that had a completely different approach, telling him that he was Not Alone in this experience and there were others called Mystics that had similar experiences and wrote about them. So while progressively recovering and integrating his experiences he started reading many books about this phenomena, such as James Redfield, Herman Hess, Paulo Coelho, Carlos Castaneda and others.

After this, putting aside his “crazy” mystical experiences, he studied in a Swiss Hotel Management School, were he graduated with Honors and Eta Sigma Delta Award and then went to work in a 5 star hotel as Assistant Manager for about 3 years until a deep unexplained dissatisfaction occurred. After having most of the things he could wish for, a deep sadness fell on him and the insight that if life is only about having the most things possible and working all of one’s life to buy a house and have some kids to whom he would project his frustration on, life was not worth all the trouble.

So the first of many Sacred Journeys to the East happened, where Experiences of Peace, Infinity and Love started to Manifest in a more and more Conscious way, experimenting this time with Yoga, Meditation Retreats (Vipassana and Anapanasatti) and Osho Dynamic Meditations. Great things started to happen but it was only with the discovery of Hridaya, the Spiritual Heart, approx. 5 years later, that the ability to experience what We truly Are (Satchitananda) Happened.