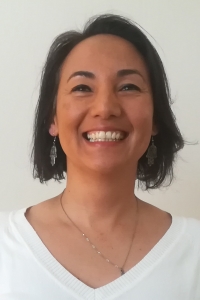 My name is Deidré, and I am a fellow aspirant on the spiritual path.

I was born and raised in Cape Town and lived abroad for 16 years, most recently serving and studying in heart-centered spiritual communities in Latin America between 2012 and 2019.

My purpose is to anchor Light and help others discover theirs while supporting them along their process of heart awakening. I fulfill this purpose by advocating compassionate ways of living, teaching non-dual and yogic philosophy, meditation techniques, breathing practices, and yogic asanas.

I have a deep passion for compassion. I also feel very strongly about making the benefits of yoga accessible to “every body” regardless of that body’s age, shape, size, income, color, gender, sexual orientation, and ability.

I am the primary caregiver to my octogenarian parents, and I serve as a board member of Revolutionary Yoga NPO and Earth Child Project NPO.

I attended my first yoga class at a gym in 2000. Back then, yoga was only about stretching and relaxing. It wasn’t until backpacking through Guatemala in 2012 that the deeper meaning of yoga started to reveal itself, and the journey took an unexpected turn… inwards! That was the start of my heart awakening.

During my first silent retreat at the Pyramids Meditation Centre, I saw a painting on a wall next to the temple where we studied. It was an image I had seen vividly in a dream 18 months prior while living in London. I later realized that the significance of the dream wasn’t its content. It was more of a wake-up call that completely flipped my perception of the default reality on its head.

I felt inspired to start teaching yoga later that year, mainly because I wanted to shout the benefits from the rooftops! It was a bit rogue, teaching without training, but my heart was open, my intention pure, and my classes grew…

I ended up living at magical Lake Atitlan and studying at The Pyramids for four years of absolute wonder, diving deeper into yogic and metaphysical studies with increasingly longer periods of silence and various initiations.

In 2013 I discovered Hridaya Yoga in Mazunte. It was and continues to be an ever-deepening journey of remembrance of my True Nature. After my first Hridaya Silent Meditation Retreat, I recall feeling “like a kid in a spiritual candy store.” I knew then from the singing of my heart, from the deep recognition of its Truth, that I would one day be sharing these beautiful teachings.

In 2015, I qualified as a Hridaya teacher and later served as General Manager while also teaching Modules 1 and 2.

After my mother’s heart attack on Mother’s Day 2019, the decision to settle back in Cape Town became clear. My priority continues to be caring for my elderly parents, and thankfully my mum’s condition is now stable. It is a labor of love and very much a deepening in the practice of seva (selfless service) and Karma Yoga, conscious love in action.

In January 2020, I had the honor of joining the training team that presented a 100% scholarship-based yoga TTC to previously disadvantaged young adults of Cape Town. This offering that was a partnership between Yoga Without Borders (Spain), Health Warriors NPO (South Africa), and Sampoorna Yoga (India), took place in the township of Langa and involves ongoing mentorship.