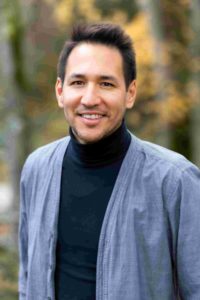 Jürgen felt a yearning early on in life for spiritual teachings and a pull for the East, which first started when he was 17 with reading Herman Hesse’s novel Siddhartha, prompting a journey to Asia.

He later followed courses in Taoism and meditation at university alongside his studies in political science, and continued to travel to Asian countries, including living for some time in China and Thailand. However, his life really took a turn when he was introduced to yoga in 2014. He started to passionately practice and live these teachings and made the decision to leave his corporate life in Vienna.

In 2016, he sat his first 10-Day Hridaya Silent Meditation Retreat. Deeply inspired by the simplicity of Ramana Maharshi’s teachings, honoring silence, and the integration at Hridaya of the yogic and Tantric paths, he committed to helping open the center in France. He has been serving there ever since, first as an administrator and after completing his Hridaya Teacher Training in 2017, as a teacher.