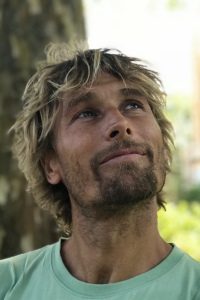 Originally from Belgium, Xavier is a seasoned traveler who is passionate about exploring other cultures, lifestyles, and traditions. In 2006, he became almost blind, which was a turning point in his life, forcing him to pause and look inside. Realizing that what he was seeking externally could be found through an internal journey, he simultaneously recovered his sight and started practicing yoga, at first in the Iyengar tradition, practicing yoga and meditation in India, and then doing a teacher training course in the yoga of energy in Switzerland. He discovered Hridaya in 2015 and deepened his practice with the school, completing the Hridaya Teacher Training Course in 2017. Since then, he has been teaching consistently at our centers in Mexico and France and enjoys sharing and connecting in transparency, joy, and truthfulness.